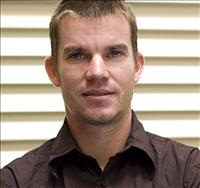 Ben Rattray is an Associate Professor at the University of Canberra (UC) working with the Research Institute for Sport and Exercise (UC-RISE). He teaches across several Exercise Physiology related units at both undergraduate and postgraduate level and contributed to the Australian and New Zealand version of the Power and Howley Exercise Physiology textbook in 2014. Ben earned his doctoral degree at the University of Sydney in 2009, focussing on mitochondrial and calcium interactions in skeletal muscle. Since starting at UC in 2009, Ben has shifted his focus towards understanding interactions between human movement and the brain, seeking to optimise health and performance. Ben’s research seeks to understand how exercise can impact cognition and how the brain contributes to fatigue in both acute and chronic settings. His work utilises approaches including perceptual and performance outcomes alongside cerebrovascular physiology, electroencephalography and structural MRI. This work has been applied in a range of contexts including military, occupational, health and high-performance sport settings. In 2016, Ben was awarded UC’s Early Career Research (Science, Health and Technology) prize and has a growing reputation as a leader in the area with collaborations worldwide. Ben now heads the Active Brain Research (Twitter) theme within UCRISE. But, to be honest, he would rather be orienteering, running, mountain biking, adventure racing, playing basketball, kayaking or skiing (all badly), and be spending time with his family.

Influence of a same-day priming bout on evening competitive swimming performance-Schedule 11 under Umbrella 2012000356.

Are Individuals Who Engage in More Frequent Self-Regulation Less Susceptible to Mental Fatigue?

Can the intensity of physical activity be accurately measured in older adults using questionnaires?

physiological factors
Military Personnel
Cognition
cognition
personnel
Your message has successfully been sent.
Your message was not sent due to an error.
If you made any changes in Pure these will be visible here soon.