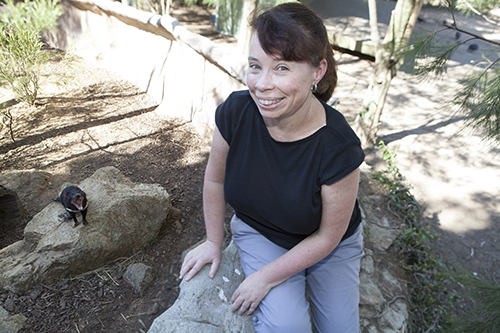 Janine is a Professor in Genomics and the Director of the Institute for Applied Ecology. Janine received her PhD from Macquarie University (Australia) in 1998. Janine then carried out postdoctoral research at the University of Texas Health Science Center at San Antonio before returning to Australia in 2001 to take up a research position in the Comparative Genomics Group at Australian National University. From 2004 -2010, Janine was a member of the Australian Research Council Centre for Kangaroo Genomics. In 2010, she was awarded an ARC Future Fellowship to carry out research on devil facial tumour disease. Janine moved to the University of Canberra in 2013.  Janine is continuing her research on devil facial tumour disease as well having projects on chromosomal speciation in rock-wallabies and sex determination in the central bearded dragon.

Using rock-wallabies as a model to study chromosomal speciation

A major challenge we face is determining how best to manage biodiversity, while lacking an understanding of one of its key drivers - speciation. This project aims to determine the extent of chromosome rearrangements between rock-wallaby species in northern Queensland, where speciation appears to be caught in the act.  This research will help us to understand the role chromosome rearrangements play in speciation.

The Southern Brush-tailed Rock-Wallaby is a critically endangered lineage of a species threatened across its range. The aim of this project is to evaluate the effectiveness of the genetic rescue at the genomic level. This project will also facilitate genetic monitoring of the captive breeding program in an informative manner that will contribute to adaptive management decision-making.
This project will involve primarily lab-based work with the opportunity to participate in sBTRW fieldwork at Tidbinbilla Nature Reserve. Contact janine.deakin@canberra.edu.au for more details.

Chromosomics: Bridging the Gap between Genomes and Chromosomes

Research output: A Conference proceeding or a Chapter in Book › Entry for encyclopedia/dictionary

Marsupial chromosomics: bridging the gap between genomes and chromosomes

Sexual conflict in action: An antagonistic relationship between maternal and paternal sex allocation in the tammar wallaby, Notamacropus eugenii

Your message has successfully been sent.
Your message was not sent due to an error.
If you made any changes in Pure these will be visible here soon.