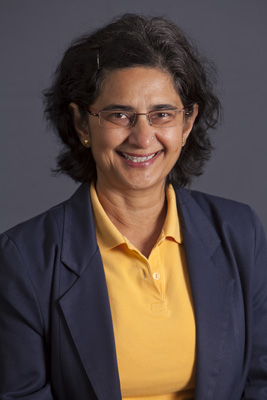 Reena Ghildyal obtained her PhD in Life Science from Jawaharlal Nehru University, New Delhi, India; a premier Indian research university. This was followed by postdoctoral fellowships at the State Department of Agriculture, and Macfarlane Burnet Institute in Melbourne, Australia.

In 2004 Reena was invited to establish a respiratory virology research group as part of a new Chinese Government initiative within Fudan University, Shanghai. On her return to Australia in 2007, she has continued her association with Fudan University and has been instrumental in establishing several bilateral research collaborations between Chinese and Australian scientists.

Reena moved to University of Canberra in 2010 where she is currently Professor in Microbiology and Director, Centre for Research in Therapeutic Solutions.

The focus of Reena's research is molecular pathogenesis of respiratory viruses with special reference to asthma exacerbations. Current projects include the validation of respiratory syncytial virus (RSV) vaccine candidates in vitro and in vivo; elucidating the role of cytoskeleton in RSV assembly, investigating the role of rhinovirus (HRV) proteases in disease.

Open Access
File
Myofibroblasts
Glucocorticoid Receptors
Airway Remodeling
Fibroblasts
Lung
Your message has successfully been sent.
Your message was not sent due to an error.
If you made any changes in Pure these will be visible here soon.